Introduction to THE energy problem

With 6 billion people demanding ever more energy to live their lives, everybody will sooner or later face problems with their energy supply. Our ’traditional’ energy sources have a number of problems associated with them. They are finite in size. Also, they cause serious problems with our natural environment. And last but not least, political tensions are very high since these sources are distributed unevenly over the earth, yet we all want access to them.

Oil and gas are running out

One of the closest kept secrets in the oil industry is the knowledge of when the oil wells will run out. It has not yet informed many other people about their knowledge, and when oil executives are asked, they always talk about periods of “50 years or so”.
It has been well documented that the rate at which new oil is found peaked around 1999. Dr. M King Hubbert predicted this scenario already in 1974. This means that even though we will still find new oil, the rate at which we find will decrease. Given that our consumption will increase (China’s recent increase in oil imports is a big factor),  this means that at some point in time the price of oil products will go up. Over the period 2001-2005 an increase of around 40% was observed. This is not likely to abate, and a reverse is out of the question.

We pay a huge price for our addiction to oil. Crude oil is a nasty substance that must be refined to extract the energy stored in it. From the moment the oil is pumped out of the ground to the emissions from the petrol-driven car, oil brings pollution and destruction to this world. Accidents with oil tankers kill our seas and beaches (The Exxon Valdez disaster, for example). Children are born with deficiencies because of car emissions.

A  phenomenon attributed to the usage of oil and other fossil fuels is the warming up of the global atmosphere, the so-called grenhouse effect. Although the result of burning hydrocarbons over decades, it is only lately that we have begun to understand the symptoms and what they mean for our environment.

The current woes in the Middle East are a direct result of our appetite for oil. Our western societies are based on the consumption of fossil fuels that are largely won in this region.  Why this is a tenuous situation can be explained by these points:

We can rid ourselves of oil if we devote our energy and intellect to a massive transition to other energy sources.

Solar energy provides an great alternative to oil. The sun radiates enormous amounts of energy and on earth we receive much more than we’ll ever need. For more information,  go to this site.

Wind energy is a direct offspring of solar energy – the heat of the sun provides for temperature differences which cause winds. The wind is an unlimited and clean energy carrier. In certain regions, where solar energy is not a very rich source due to climatic reasons, wind is an excellent alternative. 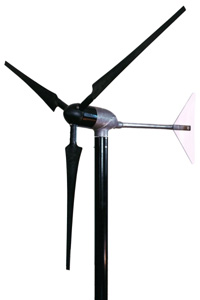 Small turbines range in size from 50 Watts to 25 kW, with rotor diameters ranging from 1 to 7 meters. They do not suffer from many of the limitations that the large ones have. For example, if you have 20 small turbines producing the same energy as one large one, the probability that all 20 stop at the same time because the wind  stops blowing is much smaller than the probability that the huge turbine stops. The small turbines can run freely, not impeded by the rule that they must adapt to a grid frequency – they run as fast as is needed. Their electricity output can be converted from AC to DC, to charge a battery or simply be converted back to AC with the proper frequency to feed the grid – local needs can be met. Their site location is not limited to wide open coastal areas or farms: Roofs on inner cities houses are excellent spots for small turbines. And, very important, they do not raise resistance in the public since their placement does not pollute the horizons:  Maximum tower height for a small turbine will be 25 meters, as opposed to the 150m high cathedrals of the electricity companies.

Opponents of small wind turbines always point out that they are not economical in comparison to the large turbines. One point that is always forgotten in that comparison is that small turbines do not need the huge and costly electricity grid. Not building or maintaining such a network will save a lot of money and this will benefit the users of small turbines. The large turbines cannot function without such a  network and as such need the huge investments for a large electricity network.